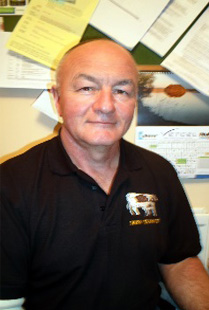 My name is Colin Turtle, a rather aged Ulsterman, exiled to Cumbria, who unexpectedly found himself becoming a sole farm practitioner, approximately two years ago, when my then employer announced his retirement at the ripe old age of fifty two (several years my junior). I tried to purchase the practice alas unsuccessfully and thus the How Farm vet practice was born.

I had spent 25 years in a large partnership in Staffordshire, but tended to be hands on at the rectal glove end of things rather than the purchasing side. My philosophy had always been to charge reasonable professional fees for my time, and sell medicinal products as competitively as I could. I was fairly sure that this was not going to as easy, as a one man band, as it had been in a multi person farm practice in Staffordshire. Profit is however, only the difference between income and overheads, and my overheads are extremely low. To keep my drug prices low, I needed to find a solution that would give me the benefits of being in a much larger practice. I was recommended Vetcel by a rep from one of the wholesalers, I gave Chris a ring, and the rest, as they say, is history.

I suspect that the group can probably do a lot more for me than provide drugs at competitive prices, various office functions have also been offered, but I am enjoying my independence and even the mundane tasks are quite satisfying when they have a direct bearing on one's business. I make little use of many associated services that are more applicable for mixed or small animal practices, but I keep an eye on the conference centre, and I am keeping pretty near the top of the League Tables.

In summary, I made the right choice in joining Vetcel it retains my independence, but gives me many of the benefits of being in a bigger practice, plus a virtual "manager", when Chris or Jonathan send an email to warn or highlight something important that I might have missed.